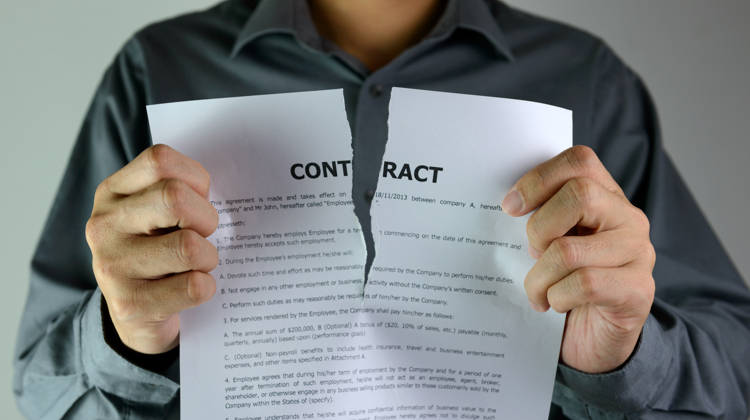 A contracting gig can be a great opportunity to earn some steady income, make new connections and build your portfolio—all without being stuck on staff. But what happens if you want to break your contract? Are you trapped? Read on…

Today’s question comes from Wendy P. who asks, “I’ve been freelancing for a while and I was just offered a contract position with a company downtown. I’m a little worried about contract work though—I’m used to a little more freedom. If I take this project, is it really a literal contract? And, if so, can I get out of it if I need to? (Or want to?)”

Now, as you have probably surmised, “contracting” also involves signing a contract. Usually you and a client will sign a contract that outlines the terms of your tenure there; say, 30 hours per week for six months. The nice thing about this is that you’re guaranteed those hours for that time. At the same time, the company you’re working for knows that they’ve got a writer for the work that they need done.

Well, you’d think that by nature of the word “contract” that you’re stuck, but this isn’t necessarily the case. In practice, the contract is really more for your protection; the company has agreed to keep you on for those hours and that time period. But if you really need to break your contract, there’s a good chance that it’s just a matter of talking to your boss/main contact about it.

If, however, you absolutely must break it, sit down with your boss and make sure you’re having this conversation with plenty of notice. You should give them at least two weeks; there are few better ways to ruin your professional reputation than to tell them you’re just not coming back.

And remember, too, that you really are asking for a favor, so try to be accommodating. Offer to train your replacement, offer to negotiate when your last day will be, offer to put in extra hours until then to help get work done.

And those that won’t? Well, that’s up to you. If you can tough it out and it won’t be a major hardship, it might be worth just getting through it. If you absolutely need to get out of you contract and the company is inflexible, at that point, you might want to get in contact with a lawyer. (I know, this sounds scary. I promise you, there’s a very, very good chance it won’t come to this, but I feel like we should take it to this rare, but possible, conclusion.)

I want to say, too, that contracts that seem long at the outset always end up going quicker than you expect. I’ve signed on for six-month contracts, thinking, “Half a year! How can I do that??” and then watched the time pass in the blink of an eye. If you’re new to contracting, I encourage you to give it a try. You may not be losing nearly as much freedom as you think you are, and you’ll be gaining a lot, to boot.

Your turn! What questions do you have about contracting? Let us know in the comments below!