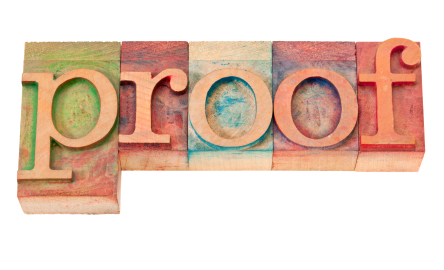 Someone has a great idea. But, as with any great idea, there’s no telling whether or not this idea will actually sell. In some scenarios, it’s then up to a copywriter and designer to help them figure out how likely it is to succeed with a “proof of concept” test.

Today’s question comes to us from Allie M., who asks just that: “There’s a kick-off scheduled next week for a ‘proof of concept’ project. What does that mean?”

Let’s dig into this with an example. Say you work at a travel company and someone has an idea for an email that will send people alerts when hotels in a certain city go on sale. Great idea, right? That person could, of course, spend all the time to design and develop that email series and then try to get subscribers. If he gets lots of subscribers, great! His idea was a success.

But if no one’s interested, he’s just wasted all that time designing and developing an email no one wants. So what he could do instead is a proof of concept test: He could build something that would allow him to test whether or not people are actually interested in his email before he actually builds the email.

In our example, the best way to test it would be to build a sign-up box onto this travel company’s website and see if people sign up for it before he’s actually created the email they’re “signing up” for. Now, I know this might sound a little disingenuous to some people: “They’re signing up for something we might not even give them!” This is true and, if you decided not to create the email after all and you feel really strongly about it, you could always send a single email to let them know that the hotel alert email has been discontinued and you won’t be sending anything to their email address.

A very important note, though: Don’t do a proof of concept test that requires people to pay for something. If you take people’s money and don’t actually have a product to deliver, you will be in a whole heap of trouble. Proof of concept should require a simple action like clicking or signing up.

Now, how do you write proof of concept copy? It’s simple: write for the project as if it weren’t a test. That is, write exactly what you would write to get people to take that action. Don’t write anything like “We’re considering starting a hotel email. Would you be interested?” or “We’re sorry, the hotel alert isn’t yet available.” Write it as if that hotel alert exists; something like “Sign up now to get email alerts when hotel prices in Boston drop!” The copy has to be real sales copy in order to truly test whether or not someone would really and truly take the action.