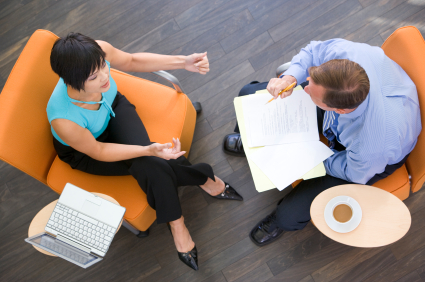 “Negotiation” is a big, intimidating topic. Entire business school classes are dedicated to it. Then, add in the stressful factor of your own (and maybe your family’s) livelihood and no wonder most people cringe at the idea of negotiating their salaries. But it’s not nearly as difficult as it seems—and you won’t need a semester to master it. Read on…

Today’s question comes from Kayle H. who asks, “I’m interviewing for a job and I think I’m going to get it, but I get freaked out when it comes to the ‘salary discussion.’ How can I make this less painful?”

Many people get deeply uncomfortable when it comes time to discuss their salary with their potential employer. I won’t speculate as to why this is, but I will offer a few tips to make the process easier.

(I should note that this post will discuss salaries, but it’s also applicable to hourly rates for fixed-time contract or freelance work; say, 40 per week for 10 weeks or something like that.)

That’s how salary negotiation works. They want you, they want to “purchase” your services and they want to do that for the lowest reasonable price they can. But they also are often willing to slightly increase that price if they want you badly enough.

Let me say, too, that you are always well within your rights to try to negotiate. As long as you are polite, friendly and reasonable, no one will think ill of you. This is your life, this is your livelihood and you have every right to have a discussion about a salary before you take a job.

Now, if you’re offered a salary that’s lower than want you want or what you expected and you want to negotiate, start by coming up with a good, legitimate reason to negotiate.

A not-so-good reason? You just want to make more money. Look, that may be your real, deep down reason, but come up with an objective, legitimate spin on it anyway. Coming back to a hiring manager and saying “Can we talk about the salary? It’s a bit lower than I made before and I want to make sure I’m progressing” is always going to sound better than “Can we talk about the salary? I wanted to make more.” People are just naturally going to be more receptive to the former than the latter.

Before you begin the discussion, decide for yourself how much you want to make. What’s the real number you want? Then…round that up a bit.

Negotiation is about going back and forth. I’d love to tell you that if you were offered $65,000 and you tell a hiring manager you need $70,000 in order to pay your bills, that he or she will come back with an offer for $70,000. But, chances are, he or she will come with an offer of $68,000. It’s just how the world works. So anticipate that and round up just a little bit.

Then, let them know that you’re excited to work there, but that you’re a little concerned about the salary because (insert your own reason here). Ask them if there’s room to discuss it.

At this point, most hiring managers will ask how much you were hoping to be offered.

Give them the number. Don’t apologize, don’t hedge, don’t qualify it, just plainly state the number. You are a professional and, assuming you’ve thought about it realistically, you’re worth that amount. It’s up to them whether they want to pay it.

Again, it’s very likely that, if the hiring manager is willing to negotiate, he or she will come back with a slightly lower number than what you’ve asked for. Or they may come back with no new offer at all. This is where the ball’s entirely in your court. Will you be happy with whatever amount he or she has come back with?

A few of the more assertive people may try for another round of negotiation but, in the end, it’s still going to be up to you: Can you be happy with the money they’ve offered?

If yes, great, you’ve got a job—and you’ve negotiated for a higher salary. If no, well, then this job just isn’t for you. If they can’t pay you the amount of money you need, you may just need to walk away. Just because they think you’re right for the job doesn’t mean the job is right for you.

Part of being a professional is knowing your worth and being able to assert that. Discussing your salary can be a little unnerving, but don’t forget that the only person you can truly rely on to make sure you’re earning what you deserve to is you.

Your turn! Have you every negotiated your salary? What was the experience like? Let us know in the comments below!