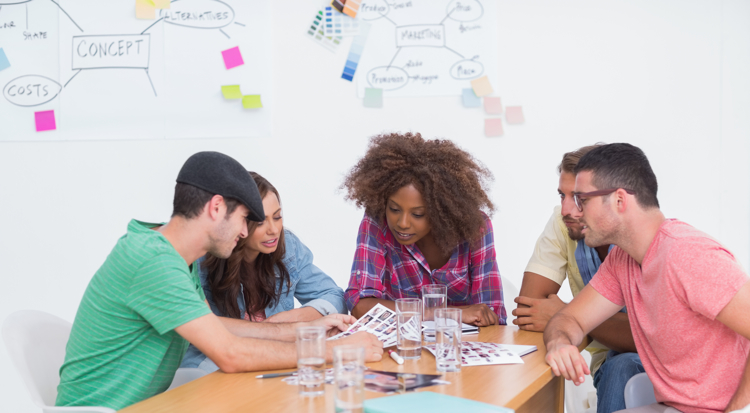 If your dream is to work in a crazy, creative, big-client landing, award-winning agency, you are certainly not alone. Many copywriters want to get into an ad agency as soon as they possibly can. But what’s it really like to work in an ad agency? Funny you ask. Read on…

Today’s question comes from Marquis M. who asks, “I’m interested in working in an advertising agency, but I don’t actually know what that would entail. I know they’re not all MadMen now, but what’s it like today?”

Just to get our terms straight, an ad agency is an external company hired by another company to come up with and execute on advertising (and/or marketing) initiatives. An agency can be comprised of just a handful of people, or it can be a global player with thousands of employees (though generally not all in one location). Obviously, your experience is going to be just a little bit different in one or the other, but let me try to give a general look at what it’s like to work in one.

Ad agencies used to have a reputation as being the hottest, hippest places you could work. Since start-ups, and then more established companies, started installing kegs, foosball tables and Playstations, they haven’t quite had the same cache, but advertising agencies are still very exciting places to make a living. When you walk into an ad agency, you’ll often be able to tell that it’s an agency—or, at the very least, you’ll be able to tell that there’s some interesting work being done there.

It’s a pretty well accepted that an ad agency tries to make its office look as cool as it can. Beyond the looks, though, you’ll generally find yourself working with some very creative, dynamic and, yes, quirky people. Especially on the creative team, there’s a premium placed on being interesting and artistic (whatever that means to someone).

Work in an agency tends to be very fast-paced and when you’re on deadline, there’s no such thing as “going home at five.” If a client comes back with a change and needs it done immediately, you’d better believe you’re going to do it immediately. In fact, you probably shouldn’t expect to leave at five on a regular basis. As a rule, if you work for an agency you work long hours. But, of course, that keg, foosball table and Playstation do help to make up for it.

You can also expect to work long hours if you’re helping to prepare a pitch; the presentation that’s made to a potential client to try to win their contract. Pitch time can be especially stressful, too, as you might guess—nobody wants to lose out on business.

One nice benefit of working at an ad agency as opposed to an internal agency is that you’re beholden to client requests, but they’re not actually in the same office as you. There’s an art to complaining about problem clients and agency pros have mastered it.

In a big agency, you’ll likely be relegated to working on just one or two big clients. In this scenario, you certainly get to know that client’s style very well, but you may miss not having a variety of work. In a smaller agency, of course, there are fewer hands to do the work, so you’re likely to get involved with many of the clients.

Like in any job, a lot of the quality of life is going to depend on who you work with and who you work for. You’ll work closely with designers, so it’s important that you develop good relationships with them. You’ll also enjoy your agency tenure a lot more if you have a supportive, but challenging, creative director to help you grow.

Overall, ad agencies can be great places to work and, even if you don’t intend to spend your entire career working in one, I strongly encourage you get experience in an ad agency under your belt. (Contracting can be a great way to get in.) People love to see agency work on someone’s resume, so it can only help you nab more and better jobs.

Your turn! Have you worked in an ad agency? What was your experience like? Let us know in the comments below!