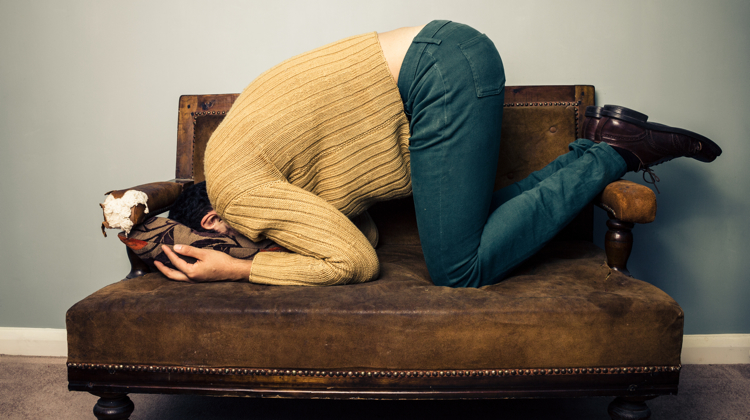 Any kind of writing is open for critiques, but copywriting is one of the few where you’ll get that feedback from a full group—and in-person. If you’re the kind of person who takes your work personally, you’ll need to find a way to get some distance and perspective. How? Well, read on…

Today’s question comes from Eva O. who asks, “I dread presenting work in creative reviews. It’s not that anyone is mean or anything, but their feedback on what we’ve created just makes me feel bad. How do I get over this?”

It can be surprising for new copywriters to get live feedback on their work from a whole group of people; there aren’t many situations where five to ten people will sit down with you and tell you to your face exactly what you’ve done well and not so well on a project you’ve poured your heart into. And, yes, some people take this personally.

But before we get into tactics for getting over the sensitivity, let’s talk a bit first about what a creative review—and really, an entire creative project—actually is.

You and your design partner take your project from concepting through a finished piece, and that can make it can feel like it’s all yours. But that’s not actually the case. To begin with, the idea for the project itself likely from one or more project managers, who probably had to convince their higher ups to give them approval to do it. And then, in addition to that, there are multiple people who are going to be part of making it come to fruition, whether that be developers for a digital project or producers for a print project. And, of course, the outcome of the project affects not just these people, but the company goals and the company itself.

Even though it feels like a project is entirely yours, it’s not. The completed and launched/produced project is the result of a larger group of people working together. And as such, this group of people need to come together and offer expertise from each of their individual areas of mastery. One of the key places to offer this is in the creative review.

Creative reviews aren’t about giving you feedback, they’re about giving feedback on the project and how it’s been executed thusfar. You’re not perfect, your designer isn’t perfect and you simply don’t have the knowledge that some of these people do. You need their input to make this piece the best that it can be!

The most important thing to remember is that the feedback is not feedback about you or your abilities. Developing a “thick skin” is really more about having some perspective about what’s going on in the meeting. That feedback is only about things that need to change in the piece in order to make it excellent and effective.

It’s not about you. And, just as important to remember: You are not your work. Sure, your work is something that you put effort into, but it’s not a reflection of your value as a person or even a true reflection of your value as a copywriter. No one gets it right all the time and, at least 97% of the time, your work won’t get instant approval in a review. And that’s not just true for new copywriters, it’s true for all copywriters.

A creative review is a bunch of people getting together to help each other make a project into the best it can be. Don’t let yourself read into it any more than that.

Now, sure, there will be times when your feelings might get hurt. Maybe you’re having an off day already, maybe it was a particularly tough project or maybe someone in the review is just being especially snippy or rude.

The most important thing to do in these scenarios is to keep yourself together. You’re a professional! If you need to leave the room for a moment, do it. If you need to suggest a follow up review later, do it. But don’t, under any circumstances, get angry, get upset, cry or yell. You need to be in control of yourself and you need to be above it all. Just as your projects aren’t you, your job is not your entire life. Get out of the scenario as soon as you can, cool down, complain to friends, have a beer—whatever. Just don’t lose control in the meeting.

Again, though, the vast, vast majority of creative reviews will be calm, civil and constructive. Don’t let yourself make it about you. It’s just about the project and making it the best it can be.

Your turn! What have your experiences in creative reviews been like? Let us know in the comments below!