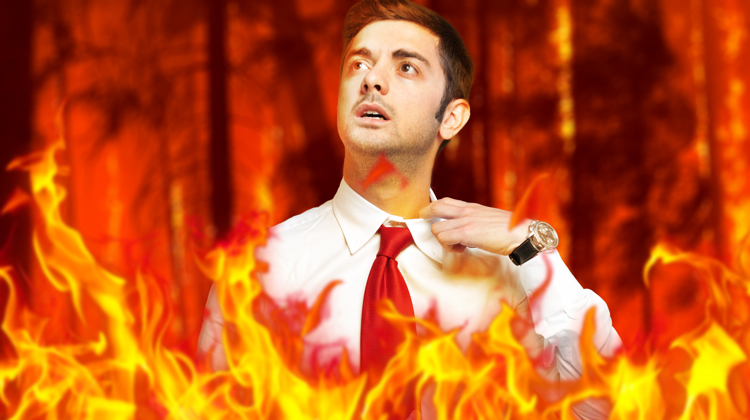 We focus a lot on ways to be a better copywriter, but let’s turn things around a bit. Today we’ll focus on the not-to-dos: seven things that will make you a worse one and earn you the dislike of your boss/client and coworkers, if not help you lose your job. Intrigued? Read on…

Today’s question comes from Dave T. who asks, “I’m freelancing at a new company and people keep talking about how bad the last copywriter was! I guess it bodes well for me, but how do I make sure I avoid becoming the next gossip topic?”

To begin with, obviously, the best way to keep your job is to work hard, work well, be friendly and be professional.

Okay, now let’s move on to the seven ways to tick off your coworkers and boss, burn bridges left and right and generally put your job in serious risk. There’s no fire like a bridge burnin’.

1.  Don’t ask questions.
When you’re in a kick-off and you don’t completely understand something in the brief, don’t ask questions. And then don’t follow up with questions before the creative review, so you’ve ended up creating something that doesn’t meet any of the objectives and has just wasted everyone’s time.

2. Miss deadlines.
Every project you’re given has a deadline attached to it. Want to make people crazy? Miss ’em. And not only miss them, but don’t give people any warning that the project won’t be ready by its due date. Even better, when people come around asking where the project is after the missed deadline, complain about being really busy.

3. Shirk responsibility.
If people ask you to do absolutely anything other than write copy, refuse to do it. For example, if your boss asks you to research how competitors are advertising for an upcoming holiday to use as comparison pieces for the piece you’ll create, tell him, “That’s not really my job.” Or, avoid doing it for so long that someone else has to do it.

4. Be difficult and inflexible.
When you’re in a creative review and someone gives you some feedback, refuse to incorporate it. Or, better yet, tell them that it “can’t be done.” Everyone knows that creative work is flexible and valid, insightful suggestions can almost always be included in a project. But don’t be so easy to work with—refuse to make changes.

5. Complain about your company.
After a hard day, or even just a someone annoying meeting, log on to any and all of your social media accounts to complain. Sure, you’re friends with people you work with, so they can see it and they’ll probably bring it to more people’s attention. That just means more people will know how annoying your company is! And yes, that company pays your salary, but who cares if your boss finds out you called him a “jerk” to 400 people?

6. Violate your NDA.
Sure, they had you sign a contract that said you couldn’t talk about any projects you’re working on. But you’re doing brilliant stuff! So not only did you talk about it on social media (and especially on LinkedIn, so recruiters could see it), you also posted the mock-ups on  your portfolio site. Who cares if a competitor company sees that and then beats your company to it? And, puh-lease, will your own company really care if they lose a several thousand-to-a-million dollars in revenue?

7. Leave with no notice.
You’re sick of working with these fools. And you’re not going to take it anymore. So instead of giving at least two weeks’ notice and allowing people to allocate your important projects to other people, you just come in one day and say you’re done. Or, better yet, you cause a huge scene and storm out. Sure, you’re definitely not going to get recommendations from any of those people now, but whatever—if your next company can’t overlook the fact that no one is willing to recommend you, you don’t want to work with them anyway. You’re too good for them. In fact, you’re too good for every single employer.

Can you imagine working with someone like this? I can and have—and I can also tell you that they don’t end up having very successful careers. Don’t sabotage yourself. Be responsible and proactive about your work, be a team player and cool off silently or with discreet friends when you’re having a bad day. You don’t want to be the office jerk, and with just a little bit of forethought, you won’t be.

Your turn! What other ways to burn bridges did I miss? Let us know in the comments below!